Here are two interesting quotes on Nahuatl, the language spoken in what is today Central Mexico and parts of Central America which has given Spanish many words.

“At the conquest, with the introduction of the Latin alphabet, Nahuatl also became a literary language, and many chronicles, grammars, works of poetry, administrative documents and codices were written in it during the 16th and 17th centuries.” Cagner, 1980:13 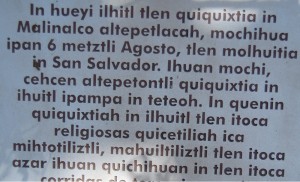 “This early literary language based on the Tenochtitlan variety has been labeled Classical Nahuatl and is among the most studied and best-documented languages of the Americas.” Cagner, 2002:195